Up in the Air

"Up in the Air", the opening number from Up in the Air, performed at the Anderson Institute of Music in 2015.

"Middle Seat" from Up in the Air, performed by Aubrie Gast at the Anderson Institute of Music in 2015.

"Everything" from Up in the Air, performed by Adam Bei at the Anderson Institute of Music in 2015.

Highlights from Up in the Air

Highlights from Up in the Air, performed at the Anderson Institute of Music in 2015

It's just a musical about a bunch of people on an airplane. What could go wrong?
Gallery Break Down Requesting Rights

There are certain types of people that you will always find on an airplane. The lady with the screaming baby. The surly flight attendant. The rude, smelly people you inevitably get stuck sitting between. And they all have their own stories. What starts out as an ordinary flight takes 12 people on an extraordinary journey that turns their lives upside down in this musical comedy.

Up in the Air is a comedy in two acts.

Up in the Air is in two acts and lasts approximately two hours.

JENNY: A very unfortunate and long-suffering young woman, who is currently having the worst month of her life.

ANGIE: 1/2 of the world's sappiest and most overly cheerful newlywed couple, on their way to their honeymoon.

SCOTT: The other 1/2 of the world's sappiest and most overly cheerful newlywed couple, on their way to their honeymoon

TANYA: Easily irritable, clever and blunt. She does not care about being pleasant or likeable, and she enjoys messing with people's heads. She is on a business trip.

PARKER: A quirky young man who is not the most eloquent or composed individual. He has trouble putting his thoughts into words, and he is terrified of flying. He is on the same business trip as Tanya, but he has never been on an airplane before.

LISA: A cynical, clever single mother. She is very opinionated, and she enjoys discussing and debating her own musings.

CLAIRE: A beautiful and seemingly perfect woman. She has a connecting flight to catch and very little time to make the transition, so she is a bit nervous. There is something about her that is just a little...off.

RYAN: A slightly overdramatic daydreamer who is lucky enough to be seated next to Claire, and quickly becomes convinced that she is his soul mate.

HANK: A grumpy, smelly, middle-aged man. Hank and Irene are the classic stereotypical old married couple. They sleep in separate beds, they bicker constantly, and they have completely forgotten why they were ever in love in the first place.

IRENE: A bitter, overweight, middle-aged woman. Hank and Irene are the classic stereotypical old married couple. They sleep in separate beds, they bicker constantly, and they have completely forgotten why they were ever in love in the first place.

SYDNEY: A gentle and sweet flight attendant. She is not the sharpest tool in the box, but she's pretty, so she's everyone's favorite.

HELEN: A surly flight attendant who is a bit older than Sydney. She has been doing this job for a long time, and is pretty damn tired of it.

SPECIFIC LOCATIONS
The interior of the airplane cabin
A desert wasteland

The Perusal Packet is free, and it contains a full synopsis, script excerpt and sheet music excerpt. Email jamie.maletz@gmail.com to request one. 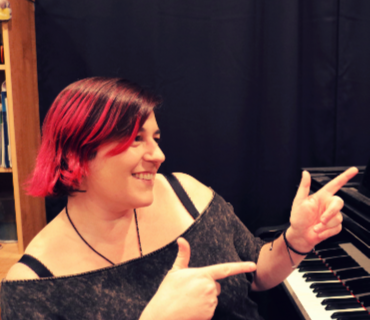 Jamie Elizabeth Maletz is a composer/lyricist, bookwriter, and producer of new works of musical theater. In New York, her works have been featured at Lincoln Center, Feinstein's/54 Below, NYU, Dixon Place, Under St Marks Theater, and Broadway Night at Prohibition. She received her MFA from the Graduate Musical Theatre Writing Program at NYU Tisch. Maletz has written 12 full-length original musicals, most of which have received workshops/readings or productions in New York and Arizona. As a composer/lyricist, Jamie has studied with Mindi Dickstein, William Finn, Rachel Sheinkin, Michael John LaChiusa, Steven Lutvak and Sybille Pearson. Jamie has worked for Maestra Music, Tom Viertel/The Commercial Theater Institute and Ken Davenport.

She is a member of Maestra, ASCAP, and The Dramatists Guild of America.

Maletz received her BA from the University of Massachusetts Amherst in 2011, where she designed her own major: Creative Writing and Composition for the Performing Arts. She spent her high school years at Boston Arts Academy, a performing arts high school from which she graduated as Valedictorian.

She is a monster enthusiast & mythology nerd, she loves board games, and she is a photographer/videographer whose favorite models are her two cats, Artemis and Batman.